Is Magnesium the answer to preventing migraines? 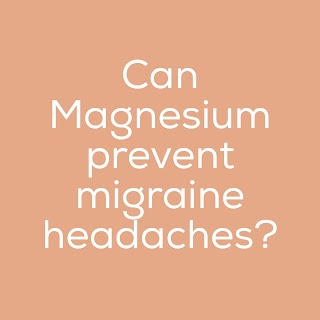 I have been a migraine sufferer for over twenty years. Anyone who has experience with migraines knows that over time you can get better at identifying the triggers for these debilitating and painful headaches, but sometimes they just happen for what seems like no reason at all. I was having some horrible allergies a couple of years ago and decided to go to an allergist and have the skin-prick allergy testing done. Afterwards when the allergist was reviewing my results with me, he asked me “do you suffer from migraines” and I said “yes”. He then circled a recommendation on my instructions form that stated: 500mg Magnesium Oxide BID (BID- twice a day in medical terminology). Then, he circled some additional recommendations for some expensive pillows, air purifier, etc., which I really did not need and sent me on my way with about four different medication prescriptions that I really did not need either.


·      WebMD. Prevention: The Future of Migraine Therapy. Version current 4 May     2010). Internet: http://www.grants.gov/web/grants/search- grants.html?keywords=migraine
Posted by The Honest Dietitian at 2:58 PM